Did you know........ that Northford was once “The Christmas Card Capital of the World?”  In earlier times Northford was a center of industrial activity producing articles such as buttons, pins, nails, tinware, brushes, silverware, paper, cards of all sorts, coconut dippers, desiccated coconut, hooks and eyes, hay rakes, rivets, gimlets and other items.  There were blacksmith shops, a tannery, a dye house, saw mills, a creamery, fulling mills, a grist mill, a lime kiln, a carriage shop and other manufacturing facilities.  All of these were located along the Farm River.  There was even a hotel in 1852.


Did you know........ that in the 19th century there were 7 school districts in North Branford, each with it’s own one-room school house?  One school house, “The Little Red School House,” in Northford remains much as it was in the early 1800s.  Several others also remain but have been converted into residences or businesses and bear little resemblance to the original structures.  Those include The Mill Road School,  The Beech Corner School, The 7th District School, The North Branford School (former Town Hall) and The 4th District School.


Did you know........ that the “Soldier’s Monument” located at the North Branford Congregational Church is one of the oldest Civil War Memorials in the United States?   According to “The History of North Branford and Northford” by Herbert C. Miller, MD the movement to build it was begun shortly after the declaration of peace in 1865.  It was erected in 1866.  Two other Connecticut towns, Berlin and Bristol, also claim the oldest monument.  An internet search reveals that there are several memorials erected as early as 1863.


Did you know........ that the three small homes located on the northwest corner of the intersection of Route 22 and Route 80  (across from No. Branford Town Offices) were originally built to house the foremen working at the Trap Rock Company?  There was a fourth house that has since been removed.  All have now been removed since 2019.


Did you know........ that The South Central Connecticut Regional Water Authority owns a third of the town of  North Branford?


Did you know........ that the worst trolley accident in U.S. history took place in North Branford?  On the afternoon of August 13, 1917, two electric trolley cars of The Shore Line Electric Railway collided near Foxon Road approximately mid-way between Forest Road and Branford Road.  Nineteen people were killed instantly and many were injured.  Read about it in our publication “The Shoreline Electric Railway and the Great North Branford Trolley Wreck” by Edna Hall.


Did you know........ that on September 14, 1849 a horrible murder took place in Northford?  Twelve year old Emily Cooper, a cousin of the murderer, was sexually assaulted and murdered.  Read about this terrible crime in our publication “The Murder of Emily Cooper” by Eugene C. MacMullan.  This is a truly fascinating story. The story can be read on our “Research Documents” page.


Did you know........ that many slaves were held in North Branford in the 1700s and early 1800s?  Justus Rose offered freedom to any slave who would fight in the Revolutionary War.  Two men took him up on his offer.  One was killed in the Battle of White Plains.  Another slave, Gad Asher, won his freedom but was blinded.  He lived and raised a family in North Branford after the war. Read Gad Asher's story on the "Research Documents 1" Page.  Reverend Matthew Noyes, second minister of the Northford Congregational Church, kept slaves.  Slavery was abolished in Connecticut in 1848.

Did you know....... that the Warham Williams House, formally located where the Rite-Aid Pharmacy is now, was built in 1750?  It was an architectural treasure!  If you have lived here more than 35 years you may remember it.  Ever wonder what happened to it?  Read the document “Warham Williams: A Country Parson and his Northford Home” by Elizabeth Livingston.  This document can be read online by going to our “Research Documents” page.  At the end of the document is a hyperlink which will take you to a 2008 article in “Antiques and Fine Art” Magazine.  You will be AMAZED!


Did you know........ that  in 1777, Col. Jonathan Meigs led an expedition to Long Island and burned 12 British ships and captured 90 prisoners? The prisoners were later marched to Hartford through Northford where they were encamped one night.  Some were guarded in the Episcopal Church and the rest in a near-by meadow on Old Post Road.

Did you know?........ that The Little White Gas Station formally located on Route 80 near the Intermediate School was the only place in North Branford that was able to pump gasoline after the 1938 Hurricane?  This was most probably because they had only a hand operated pump.

Did you know?....... that in 1940 the three roads which meet in Northford Center were Route 168 (currently Clintonville Road), Route 139 (currently Forest Road) and Route 15 (currently Middletown Avenue)?  When they were changed to their current designation we do not know.

Did you know........ that the pin oak tree on the property of the North Branford Congregational Church is an historic tree?  The following is from the website “Connecticut’s Notable Trees - 1902 Pin-Oaks:”
http://conncoll.edu:8080/notabletrees/1902PinOaks.jsp
In 1902 Connecticut held a convention in Hartford to consider updating our State Constitution. Delegates from all 168 towns attended and worked on the document. Joseph R. Hawley, one of Connecticut's US Senators, arranged for the US Department of Agriculture's Bureau of Plant Industry to provide Pin Oak (Quercus palustris) seedlings, which he distributed to each of the 168 participants at the close of the Convention to commemorate the experience. The delegates took the little trees back home, where they were planted on town greens, school yards, church yards and, in many cases, on the delegate's own property. Since there is still some confusion, it should be noted that these trees have no relationship to the Charter Oak (a White Oak, Quercus alba), offspring of which have also been used for commemorative purposes. No information regarding the parentage of these Pin Oaks has yet been found. 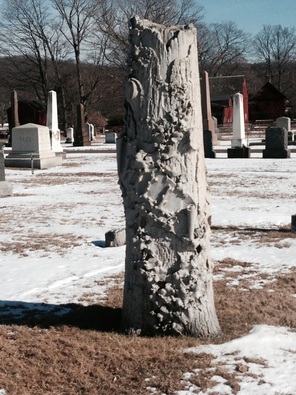 Did you know........ that a very unusual tombstone exists in the Bare Plain Cemetery?  It is that of the Hill Family.  Alden Hill was a North Branford Selectmen in the 1920s and also operated a business cutting pillngs for docks etc.  He was involved in clearing Totoket Valley for the building of The North Branford Dam.  The tombstone resembles a tree trunk. 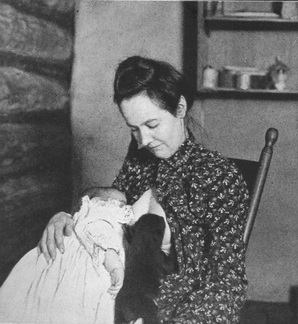 Did you know....... that in 1903 the great grandmother of one of our Chairpersons saved the life of a newborn bear cub by breast feeding it?  The little bear’s mother was killed in its den and only then was the cub discovered.  This true story is related in the book “Wild Brother” by William Lyman Underwood first published in 1921.  Unfortunately the book is out of print.

Did you know....... "Churchgoing in those days was a serious occupation. Sermons were from two to four hours long. There were no fires in the church during the winter.  The women took foot stoves, and the men tried to keep warm as best they could. At the close of the morning sermon everyone adjourned to the "Sabbath-day houses," which were small buildings in which fires could be made. The churchgoers ate lunch and thawed out, only to attend another sermon in the afternoon, to be warmed spiritually but frozen physically."
From Connecticut Tercentenary Celebration at North Branford, July 27 & 28, 1935

Did you know....... that Julius Maltby's son, Epaphras Chapman Maltby, began selling cocoanut dippers from his factory on the Farm River in Northford in the mid-1800s?  He also devised a way to use the coconut meat by adding sugar and desiccating it.  He was prevented by his father from moving his business to New York City and possibly becoming Northford's first millionaire.  His father said he should be satisfied to make $100 a day from his Northford enterprise.  Epaphras's son Wilburt became a World Champion Trick Cycle Rider and performed all over the world before crowds and crowned head of state.

Did you know....... "The Church participated in dispensing justice in connection with the breaking of some of the Ten Commandments? A case in point was the trial in 1758 of a member of the Northford Congregational Church who was accused of blasphemy when she said, 'I swear by God I will put the pitchfork into your bowels.' She admitted to the Justice of the Peace that she made the statement, but later denied it in her trial before the Brethren of the Church. She was found guilty by Church members and was excommunicated by the pastor until such time as she confessed and repented. Two other female members of the same church were tried on charges of adultery."

Note that the male members of the church were not charged with adultery.  At least one of those was known to be married at the time.

Did you know...... The town has always taken care of its poor and disabled.  The town records sometimes leave one wondering about certain expenditures.  For instance an expenditure of $3.00 for "finding where he belongs." Another expenditure was for "50 cents for snuff and 50 cents for whiskey. " Indeed expenditures for C. G. amounted to $27.62 for clothes, medical attendance and care at hospital, $10.12 for getting him to New York, $33.00 for a ticket to Copenhagen along with $5.00 for an overcoat.